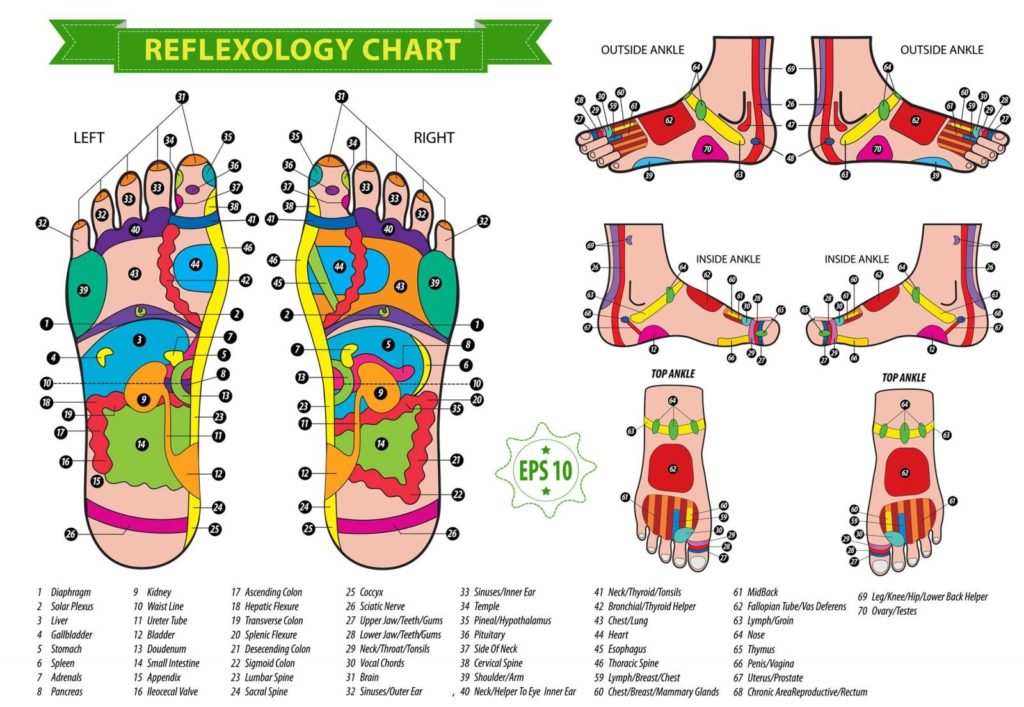 According to Reflexologists, this therapy helps to release stress and enables the body to heal and regenerate itself. A theory based on the research of Sir Henry Head and Sir Charles Sherrington in the 1890s suggests that reflexology works with the central nervous system.

Their research shows that there is a neurological relationship between your skin and your internal organs and that the entire nervous system responds and adjust to a stimulus. This theory therefore implies, an application to the feet and hands by an expert will send calming messages from the surrounding nerves in these areas to the central nervous system. This then causes the body to adjust any tension level. The result of this is that it increases the overall relaxation of the body causing the internal organs and their systems to perform at their best. Reflexology treatment is also known to positively influence the respiratory, immune and neuropeptide systems in the body among others.

There is also the Gate Control Theory or the recent Neuromatrix theory of pain that may be used to explain how reflexology relief you from pain. This theory sees pain as an individual experience created by each’s brain. The brain creates pain by responding to the sensory experience of pain. The brain is also known to be able to work on its own without any sensory input, due to some emotional factors and others. It is, therefore, believe that factors such as your mood and stress can likewise cause you to feel pain. This theory suggests that you can use reflexology to reduce stress and improve a patient’s mood to relief them from pain.

What does Research Say about Reflexology?

Research by Hudson (2015) revealed that patients using reflexology before a varicose vein surgery are known to have lower intraoperative anxiety with a relatively limited period of pain compared to patients who are receiving same treatment without using reflexology.

There is also another research by Williamson et al. (2002) that also relates reflexology and anxiety. This research found out that reflexology, as well as foot massage, can be used to reduce anxiety and depression in postmenopausal women.

Kunz and Kunz did a large review and summary of 168 research and abstracts from journals and other meetings from around the world in 2008. After reviewing, they concluded that reflexology might impact certain organs in the body as well as aid in pain reduction. It was also concluded that reflexology could be associated with making some symptoms more bearable. For instance, one research notice positive changes in kidney functioning for patients suffering from kidney dialysis.